The story of the Post-Conflict Research Center (PCRC) begins in Sarajevo in the summer of 2010. Having few resources and living on opposite sides of the world, technological advances and globalization provided us with some of our most powerful tools. We had two Mac computers and unlimited access to Skype, where we spent countless hours developing projects, writing grants, and strategically planning how to make PCRC a reality. After the establishment of PCRC, we worked without an office, without financial support, and with only a few part-time volunteers and trainees. Our journey has been an exciting and difficult one, and we are constantly faced with new challenges and new opportunities. In the end, we hope that our story can serve as an example that anything is possible if you follow your passions, believe in yourself, and work hard to make your dreams come true.

People always ask us, “How did you two meet?” and “What is the story of PCRC?” So we decided to explain some of the reasons why we chose to do this job and how we ended up on this journey together.

Velma’s Side of the Story

Many people look back to when they were 16 and remember their first driver’s license, first loves, and high school dances and parties. When I look back to my life at 16, I am overwhelmed with memories of the War. I remember the faces of refugees fleeing eastern Bosnia, the horrific stories of girls and women being raped, the bloody massacres of civilians, the sounds of mortars and gunfire, and the lack of food, water, and electricity. Those years have become an instrumental part in shaping the person I am today and the journeys I have embarked on to help those who have suffered.

I was especially inspired by Dr. Eric Markusen, a great scholar, educator, and most of all, a friend. He believed in me when I didn’t believe in myself and because of him I was able to gain the confidence and strength I needed to continue to follow my dreams. For many years after I met Dr. Markusen, I dreamt of founding an organization that would deal with issues of sustainable peace and reconciliation in Bosnia and Herzegovina (BiH). I also dreamt of doing something that would instill hope and optimism among the youth in this country and preserve memories of the War while at the same time building a better tomorrow. At the moment, my country does not know how to instill the belief that you can do anything you really dedicate your mind and heart to, nor does it provide visible opportunities for young people to pursue.

Another part of my life that has greatly influenced me is that, as a journalist, I have had the opportunity to listen to thousands of testimonies from victims and witnesses. I saw how they lived, without any support or help, and I wanted to give them a voice. Through my work with the Institute for War and Peace Reporting, I learned how to be honest, balanced, and objective. I never wanted to limit myself and listen to only one side of the story. I wanted to understand the different perspectives and experiences of all parties. I believe that every single tragedy deserves our respect no matter which side it comes from.

Leslie arrived from Denver, Colorado in the summer of 2010 to participate in an overseas study abroad program I designed and organized. While coordinating the program, I began to get to know her. She was so responsible and sensitive, and her empathy and compassion for the suffering of this country struck me very much. She had the ability to connect with victims, even though she does not speak our language. She had so much energy, motivation, and passion to change people’s lives. And the greatest of all qualities, she was able to analyze and approach the most difficult issues and topics with sensitivity and objectivity. The fact that she was willing to work with me and volunteer in so many different areas showed me that we could turn our dream into a reality.

After Leslie’s return to the United States, we continued our adventure by writing projects and grants and developing strategies and plans for our new organization, which we had yet to name, via Skype. We worked almost every day for a year while Leslie was graduating from college and I was working full-time as a journalist, researcher, and film producer. I remember we once worked via Skype for almost 19 hours non-stop. I could call Leslie at any time of the day or night and she would answer. She was always there for me when I needed her. Why was it so important for me to meet Leslie? Because her optimistic approach to life and her “Yes, we can!” attitude are rarely found in this country, and it is quite contagious. She believed in me 100% and that pushed me forward to start creating the organization I had always dreamed of. 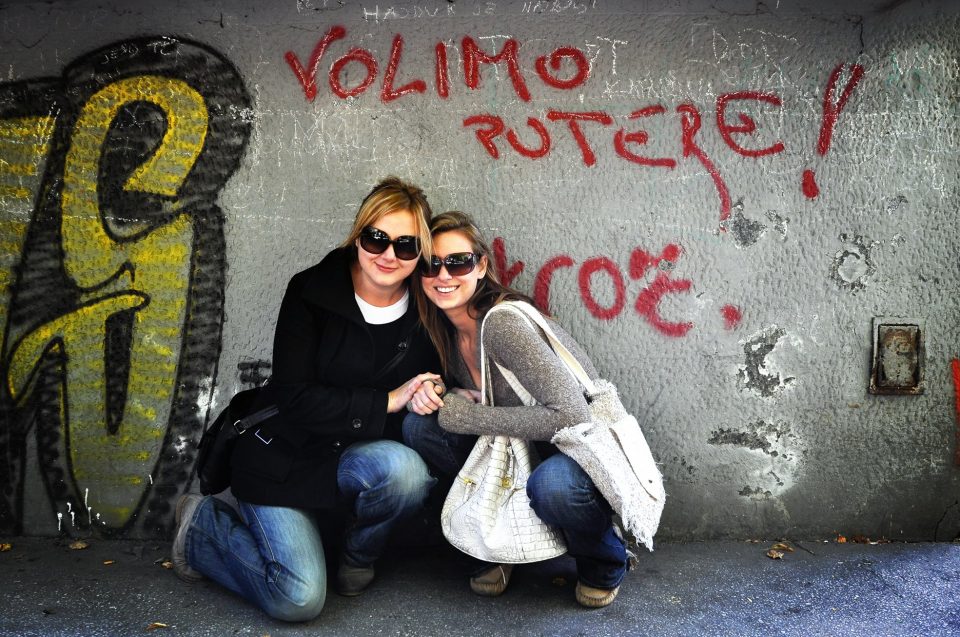 Leslie’s Side of the Story

As far for myself, I had always dreamt about going to Africa. In 2007, I had the opportunity to travel to Nairobi, Kenya, where I worked in poorer parts of Kibera and Matumba and had the opportunity to get involved in various development and peacebuilding projects. I was deeply touched by the people I met, especially the women and children I had the opportunity to work with. I was inspired by programs that aimed to provide children with the education and skills they need to get out of poverty and allow them to succeed in life outside those poor neighborhoods. I was also deeply touched and inspired by women who were victims of war and poverty, many of whom fled to Kenya from Rwanda, Sudan, the Democratic Republic of the Congo, and Somalia. These women had lost their husbands, children, and family members through unimaginable violence and evil, but despite the tragedies, traumas, and abuses they had experienced, they were working to create a new life for themselves. In Kenya, people have shown me the true resilience of the human condition and the strength of the human soul. They gave me strength and helped me find a true calling and passion. I knew then that I wanted to dedicate my life to those who were victims of these kinds of circumstances and who, if given the opportunity to grow above those circumstances, would use it to do great things. When I returned home, I focused my efforts and education on helping those affected by war, genocide, and poverty. Following this path, I became interested in countries where conflict transformation is needed and where reconciliation, post-conflict development, and peacebuilding are underway. These interests eventually led me to BiH and Velma.

When I met Velma in the summer of 2010, I knew immediately that there was something special about her. There was something so powerful in her spirit and I can only describe it as a light that attracts all those around her. She had so much knowledge about the history of the region, as well as the difficulties and challenges facing BiH. She has worked on so many significant projects, often for free, and I could see that her motives were pure and that her passion was what drove her forward. She inspired me and I knew this would change my life forever. We started spending more and more time together, sometimes sitting together for hours, writing down plans and talking about ideas we had to build peace and reconciliation in the region. Eventually, we were given the opportunity to organize a conference that brought together international and Bosnian students across the country to discuss issues related to genocide and detention camps. Despite the minimal financial and logistical support, the conference was a great success and we then realized that we are a great team. Although we came from such different backgrounds and parts of the world, we shared a vision and a deep passion for our work that created an unbreakable bond between us.

When I left Sarajevo, Velma and I continued to work every day. I couldn’t help but become fully committed to our seemingly-crazy dreams and ideas for the future, so I decided to return to BiH permanently so that Velma and I could continue our dream full-time. After a year of adjusting our lives to the eight-hour time difference and working exclusively via Skype and e-mail, I received my master’s degree and started a new life in Sarajevo. I knew it was a risk to give up everything I was used to, but it was the best decision of my life, and we continue to grow stronger every day. 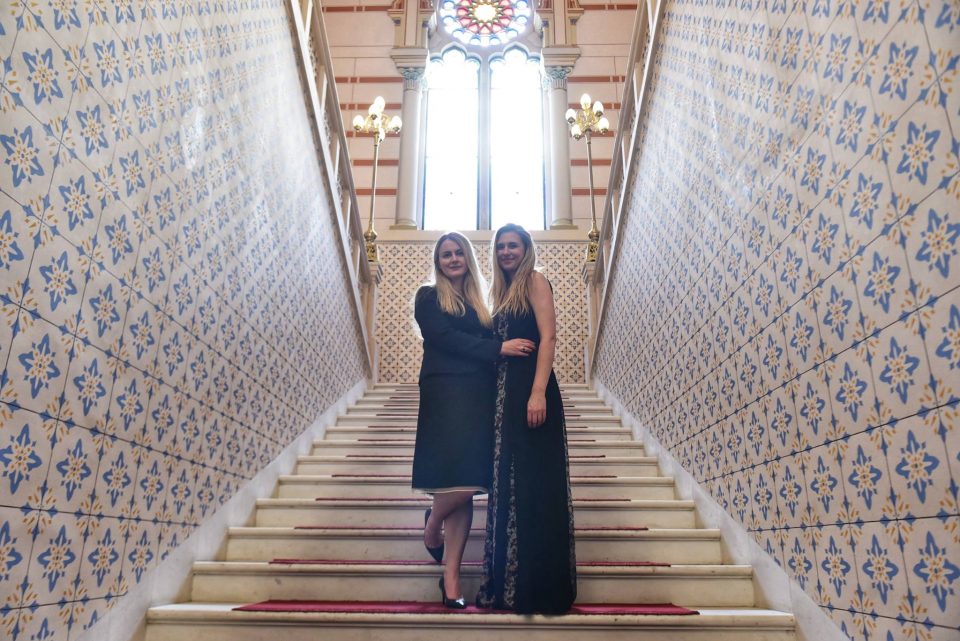 We want to especially thank our families. Without you, none of this would be possible.